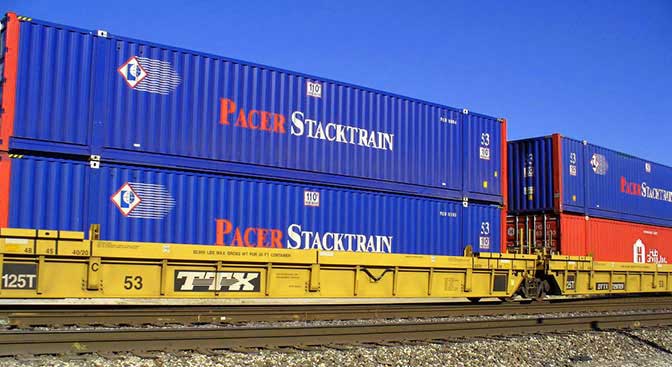 One of the key responsibilities of the Equipment group at Pacer Stacktrain was to determine the number of chassis of each size (20’, 40’, 48’ and 53’) that needed to be positioned at each location across North America where Pacer containers would arrive on trains. At the time, Pacer had the largest domestic container fleet in North America with over 27,000 containers and also had contracts with its rail partners which allowed Pacer to provide its own chassis at rail terminals across North America. Pacer had developed a spreadsheet model to estimate the number of chassis of each size that would be needed at each equipment supply point (EQSP). This analytic model used traditional inventory planning inputs like turn-time (estimated number of days that an arriving container would use a chassis), forecasted number of containers arriving on a train each day, and the number of days each week that trains arrived or departed. In general, this model did a good job at estimating the number of chassis that would be needed in “steady state” conditions. And yet, more often than was desirable, the number of chassis actually needed far exceeded the projection. We needed to identify what was causing the model to be so far off.

Since the model was developing accurate projections at about 90% of the EQSPs, we believed the fundamentals of the model to be working properly. Given that, our initial guess was that one or more of the inputs to the model was off. The most likely possibilities were that inbound freight had surged, turn-times had significantly increased, or the number of trains operated each week had dramatically dropped. However, when we analyzed updated measurements for these values, we found that actual numbers were quite close to those used in the model! With our first hypothesis proven wrong, we needed to consider other possibilities.

We decided to step back from the problem and see if we could identify any business conditions that consistently were present at EQSPs where the actual number of chassis needed exceeded the projections. We soon realized that EQSPs where we were running short of chassis tended to be locations where empty containers would build up until they were repositioned out on trains. That is, inbound loaded container volume exceeded outbound loads and empties were building up at the terminal.

We ended up modifying the model that estimated chassis requirements by using historic chassis usage trends that did include chassis on terminal, and then looking at averages, maximums and variances from the norm to develop demand projections. With this change, we were able to dramatically improve the accuracy. The change in our modeling approach was one of the key reasons that Pacer was able to meet chassis needs with an industry low chassis-to-container ratio of 85%.

What can be gleaned from the process described above that can be applied to many business problems? Below are just three key insights:

Confirm the assumptions behind a model.

Analytic models are just that, an attempt to model a real-world phenomenon. These models are based on fundamental assumptions such as the probability distribution of arrivals, linearity of a cost function, or limitations on supply. Often when models are developed and subsequently used, assumptions are glossed over and attention is paid to getting the inputs as accurate as possible, or ensuring that all of the constraints are accurately represented. But, in situations where the results from the model are not accurately reflecting the real world phenomenon, it is often best to start with confirming that the model assumptions are truly valid for the situations where the model is failing. In our case, the assumption that the chassis requirements were driven by inbound loaded container volumes did not hold for locations where empties could build up, requiring significant quantities of chassis. That said, the original modeling assumptions were reasonable for 90 percent of the actual situations!

Diagnose causes of problems by identifying similarities or commonalities.

Often, there will be situations where models are working well for a majority of cases and not working for only a few. In these situations, one of the quickest ways to diagnose the problem is to identify what the few “problem” cases have in common and then determine how the model behaves or handles those similarities. In our process, by identifying that the locations where the model was not performing well were locations where empties built up, we were able to focus our attention on how the model handled empties.

Understand how measures are being calculated.

In school, we’re often presented problem descriptions where the values (costs, supplies, demands, times, etc.) are provided to us and we are then responsible for building a model or solving a system of equations. We don’t spend much time questioning how the values were calculated or derived. In practice, determining how to come up with these parameters is often the most challenging aspect. I’ve never encountered a situation where my manager or my client came to me with a table of numbers and asked me to solve for the correct answer. Often, we are limited in our ability to come up with the most accurate set of values by the data that is captured in our systems. To develop accurate and useful models, we must understand how these limitations will impact our solutions and make allowances for these impacts. In our situation, the fact that turn-times did not include the on-terminal time after a container came back into the terminal on a chassis until the container was loaded onto the train became a serious shortcoming, especially at EQSPs where empties could build up and this time became significant.